The Siamese fighting fish (Betta splendens), native to South-East Asia, is one of the most popular aquarium fish species purchased by tropical fish enthusiasts. Easy to keep, combined with its exotic, colourful appearance, this is an iconic species among novices which has undoubtedly inspired numerous enthusiasts.

Originally used as part of a subsistence economy, for its propensity to fight other males of its species (hence its common name), over time, it has attracted an increasingly larger audience.

The origin of its reputation

In the 19th century, its reputation as a fighting fish gave rise to the emerging popularity of competitions in South-East Asia, particularly in Thailand. Animal fights were popular entertainment and the inhabitants, already seasoned gamblers, were fascinated by these new arrivals. Widely found in paddy fields, fishing for this species became a favourite pastime among children. Once they were captured, two fish were pitted against each other, in the same way as European cockfights. The most aggressive fish became the champion, until they met their match. A league was created in 1840. At the same time, selective breeding started to emerge. More aggressive varieties were bred, fights became increasingly longer, and… increasingly enthralling. At that time, gambling losses were potentially substantial, with gamblers even wagering their own homes.

Siamese fighting fish do not naturally have highly colourful, long top fins. The male has green, red, blue and black layers, and relatively small fins. Females are more subdued, with a brown colouration.

This small fish lives in a harsh environment. Paddy fields, their native environment, are exposed to extremely changeable conditions, to which the fish have adapted perfectly.

There are major variations in water levels and temperatures. The oxygen levels in this environment can become very low, which few fish would be able to tolerate.

Betta splendens adapted to these conditions by developing a novel and effective complementary breathing system: the labyrinth organ. In addition to gills which allow fish to extract oxygen from water, Siamese fighting fish can directly breathe air from the surface. This ability allows it to withstand low water levels. Likewise, its body is covered with a thick layer of slime which protects it from bacteria found in turbid water.  It can thus survive in muddy puddles until conditions improve. 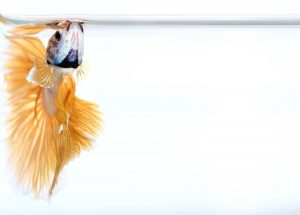 In the aquarium, it resurfaces regularly to breathe atmospheric air, then goes back underwater to go about its business.

It is no longer bred for aggression, and the varieties developed over time mainly generate aesthetic interest. It is now one of the species with the most variety both in terms of conformation (fins, etc.) and colour variations.

It is still as aggressive towards its fellow species, and males will attack each other. Interesting fact: it flares by spreading its fins to intimidate its rivals. In pet stores, males kept next to each other in tiny containers can be seen to put on this intimidation display.

The Siamese fighting fish is a territorial species. The male chases away any rivals and reigns over a harem of females. It generally lives in the mid-depths and close to the surface. The male builds a bubble nest on the surface with his saliva. He spends hours building this cocoon which becomes quite large: 8 cm in diameter and 2 cm in height.

The spawning display is remarkable: the male attracts the female beneath the nest and wraps his body around her to make her release the eggs while fertilising them. Completely focused, he retrieves sinking eggs and deposits them in the bubbles where they remain secure.

After several movements, once the female has released all her eggs, the male chases her aggressively, and can even kill her if she cannot hide. He then takes care of the eggs, depriving himself of food until the fry reach the free-swimming stage.

The Siamese fighting fish is not very demanding in terms of aquarium size: a volume of 15 litres is sufficient as it breathes on the surface. For breeding or community tanks, an aquarium of at least 80 litres is preferable, well-planted and decorated with sand.

Being a carnivore and insectivore, it requires a diet consisting of frozen bloodworms and brine shrimp. High quality dried food is now available, thanks to new developments in the production of suitable dry feed.

Article drawn up by our partners from the FISHIPEDIA site